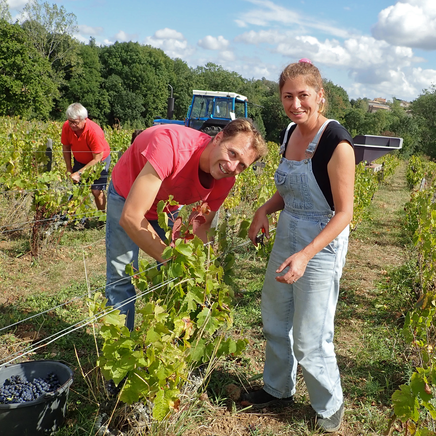 The land and the house of Lavernette, owned by the monks of the abbey of Tournus became the seigneury of Lavernette in 1596. The vines were already part of its property and at that time, there was a "tinailler" (wine storehouse) containing two presses and four large vats. Nowadays the property of Château de Lavernette, situated at the crossroads of the Mâconnais and Beaujolais regions in the communes of Chaintré and Leynes, belongs to the de Boissieu family, descendants of the de Lavernette family. Since Nicolas Bernard de Lavernette, born in 1536, Xavier represents the thirteenth generation to produce wine in Lavernette.In 2005, Xavier and his wife Kerrie, an American oenologist whom he fell in love with during a trip to California, work on the family estate, combining their qualities, experience and knowledge to produce great wines. The vineyard has been cultivated using organic and biodynamic farming techniques since 2005 in order to respect the environment and create wines that are steeped in their terroirs.