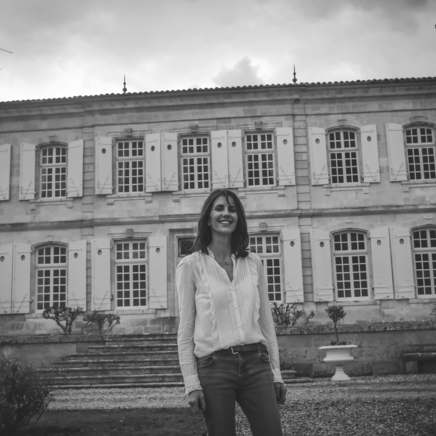 The vineyard is located on the Arveyres plateau in the region between two seas. Cradled by the Dordogne river, "Le Lau" has an intact biodiversity. The beauty of the place often has...

The vineyard is located on the Arveyres plateau (between St Emilion 18km and Bordeaux 25km) in the region between two seas. Cradled by the Dordogne river, "Le Lau" offers an unspoilt biodiversity with its woods, meadows, gardens, orchards and vegetable garden. The beauty of the place has often aroused the interest of film producers; in 1956 Pierre-Gaspard Huit shot "La marié est trop belle" with Brigitte Bardot as his main actress.
Vinification and maturing in parcels. My favourite parcel of the Domaine is located on the plateau, facing South, a parcel of Merlot from 45-year-old vines on fine gravelly
soil.

Its subsoil is clayey-gravelly and sandy.

Château Le Lau was built in 1762 by the architect Victor Louis, author of the magnificent Bordeaux Opera House. The Du Fau De Lamothe family lived there for three generations. Purchased by my parents (Marcelle and Régis Plomby) in 1988, I took over the management in 2013. Many vines were missing; we replanted and took care of our vines; careful pruning, manual budding, working the soil and under the vine rows to remove weed killers. We focus our vine cultivation on organic and biodynamic methods. The takeover of the vineyard is a new professional start for me because I used to work in the fashion industry in Paris and London. In 2013, I attended Mr. Dubourdieu's courses at the Bordeaux oenology centre on tasting and winemaking where I obtained the DUAD. I'm glad you did!

My grandfather was a winegrower. I grew up in Libourne and my parents always had St Emilion and Pomerol in their cellar... A fruity, generous, elegant wine. A wine that is as natural as possible, thus expressing its terroir and beneficial to the health of our customers. My meeting with Cédric Boudin, recruited in March 2013 as technical director, was very significant for our vineyard. He takes care of our vines with love! Another important meeting was with Nicolas Joly for biodynamics.

One of my old memories would be a tasting of a 1971 Petrus for my 25th birthday; a great moment! Our objective is to work our vines with conscience and love! This is our philosophy at Le Lau! What transports me is to understand and be in harmony with the nature around us.