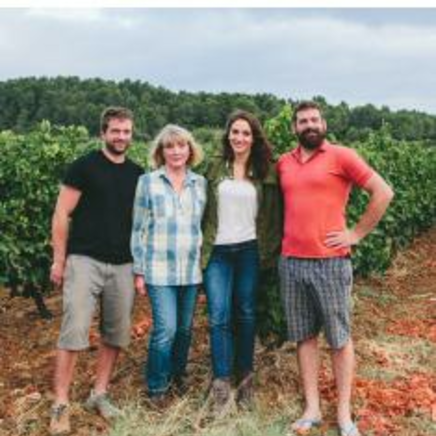 (62 ratings)
“Paraza and the King's Channel”

In 2005, Annick and Pascal bought Château de Paraza. The Domaine is revived under the impetus of the family project: between parents and children, everyone puts their hands on the vine! With love...

In the South of France, northwest of Narbonne, the Château de Paraza vineyards are located on an exceptional terroir in the Minervois. Overlooking the Canal du Midi and the Aude plain, they spread out in the sun on the hills of the village of Paraza. The vineyard is composed of many parcels of traditional grape varieties with old Syrah, Grenache noir, and Mourvèdre vines. More recently, other grape varieties (Merlot, Cabernet Franc, Pinot Noir
, Marselan, Roussanne, Gewurztraminer) have been replanted to bring diversity to the cellar.

HVE CULTURAL PRACTICES: The vineyard is managed in a rational way with cultivation practices that are often identical to those of organic farming and certified as High Environmental Value. Every day, special attention is paid to the vine, its environment and the elements likely to have an impact on its development. Respect for the terroir intimates a minimum of human actions in the vineyard, depending on climatic conditions, disease risks and the vine's receptivity stages.

WINE EXPRESSION: Château de Paraza produces wines of character, offering great aromatic richness and a balanced structure. The winegrower's signature is expressed through the emphasis on fruit and silky tannins.


Paraza? Not by chance! This name comes from Baron Jougla de Paraza, who settled there during the reign of Louis XIV, and who gave his name to the small town of Paraza. This castle was a high place during the construction of the Canal du Midi, which it overlooks, since its architect Pierre-Paul Riquet lived there and the King stayed there to admire this architectural masterpiece. To thank the Baron, the King ordered the construction of seven terraces descending from the Castle to the Canal. The Canal du Midi links the Atlantic to the Mediterranean over more than 240km and has become a world-renowned tourist site (UNESCO). To be discovered on foot, by bike or by barge.

The Château de Paraza represents the guardian of an ancestral wine-growing tradition. Since 2005, Château de Paraza has been revived under the leadership of the Danglas family. Attracted by this incredible challenge of cultivating the land, making a good wine and renovating the property to share it with visitors, the Danglas brothers gradually gathered around the project: first Matthieu, then Antoine, and finally the youngest, Lucile. With passion and respect for the land, the Danglas family cultivates 80 hectares of vines in the Minervois. In red, white or rosé, the wines produced are rich, fruity and full-bodied, with a fine balance between strength and finesse. A real pleasure for all lovers of history, nature, food and wine.

"As the harvest progresses, we dream of becoming a great Languedoc wine and a prestigious landmark for all wine lovers and tradition lovers. We like to share our passion for the profession and make everyone who walks by our cellar taste the specificities of our terroirs and wines. »

"We didn't expect it would be so complicated to take over the estate. As a result, it brought us together: first a brother, then the second, and finally the youngest. We have all been inexorably drawn to this incredible challenge of cultivating the land, making good wine and renovating this sumptuous property. As they say in Languedoc, you are not born a winegrower, you become one. »