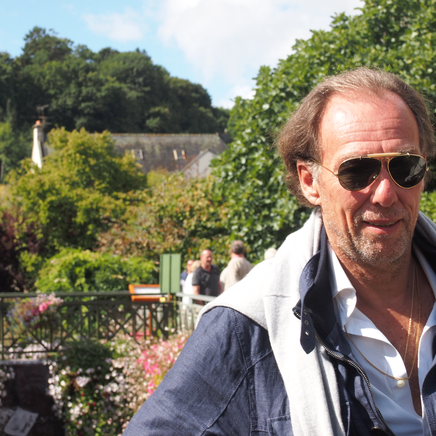 Arnaud Pelletier, before taking over the family vineyard, lived a completely different life...

The Domaine has been reviving the traditions of the Cardon family since 2013 thanks to a group of passionate friends. In a few years, they have managed to establish themselves among their prestigious neighbors.

It is the association between Thierry Bied, Pierre Pouguet and Frédérique de Cardon that gave birth in 2013 to the Domaine de Cardon in the Côte Chalonnaise. In just a few years, they have been able to establish themselves among their prestigious neighbors, as they recently received a Silver and a Gold medal at the Côte Chalonnaise competition; respectively for Les 4 parcelles, a blend of Chardonnay from 4 different parcels and its 100% Pinot Noir cuvée Les Gardes.

Domaine de Cardon has been reviving the traditions of the Cardon family since 2013 thanks to a group of passionate friends from the Côte Chalonnaise. In just a few years, they have managed to establish themselves among their prestigious neighbors, as they recently received a Silver and a Gold medal at the Côte Chalonnaise competition.The Domaine is located 30 kilometers from Beaune, in Mercurey: an appellation known for its great red wines. Thierry, the winemaker, cultivates 15 hectares of vines on different typical Burgundian grape varieties such as Pinot Noir, Aligoté or Chardonnay.the winemaker of the Domaine de Cardon produces terroir wines on the appellations Mercurey and Mercurey Premier Cru. Thanks to its clay-limestone soils, the wines, produced in mono-variety, perfectly translate Thierry's Burgundy. The Domaine de Cardon is historical and recognized in Burgundy. It all began when King Henry IV gave the estate to the Cordona, originally from Spain, for supporting him during the reform of the city of Lyon. At the beginning of the 20th century, the first vines were cultivated. Frédérique de Cardon, very attached to the history of her family, replanted the vines and gave a new lease of life to the estate at the beginning of the 21st century. The Gamay grapes are grown on granite soils in the Chiroubles area and are in the image of the great Burgundy wines that are produced in Mercurey.

"Today, we manage the estate between friends, where we all share the same passion and love of the job! And it is the love of wine that led our estate to acquire parcels under the Beaujolais Village appellation."