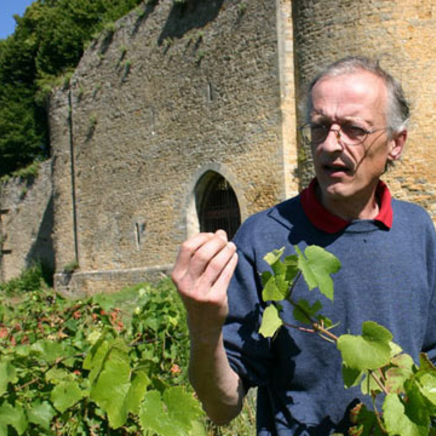 The Domaine covers 10 hectares of land, which is farmed biodynamically. Today, the father and the ...

Nathalie and Emmanuel Grand, two wine and vine enthusiasts, have created a wine estate in the ...

A family estate since the Haut-Moyen-Âge, we produce authentic local wines in the spirit of a "grand cru" of the Jura, respecting tradition. Each manual harvest is carefully carried out....

Château d'Arlay is a historic estate in the Jura region, one of the 40 members of the prestigious Académie du Vin de France. The oldest wine château in France, its ambition has always been to produce wines of tradition and ageing, where the notes of the terroir are expressed with elegance. It produces exceptional biodynamic wines that we are proud to share with you.

The grey marl of the Lias subsoil and a southern exposure, unusual in the region, contribute to the elegance and minerality of our estate. Our vines, most of them planted in 1953 and 1974, as well as our work in reasoned, organic and biodynamic viticulture, privileging indigenous yeasts, perfectly express the nobility of this château and this terroir reputed to be the oldest wine château in France.

A must-see tourist, cultural and oenological stopover located in the heart of the Jura, the Château d'Arlay has the particularity of having always been passed on by inheritance since its foundation in the Middle Ages until today, and of being considered as the oldest wine château in France.

This land was first owned by the Counts of Burgundy and then by the Chalon-Arlay - the most powerful family in Comtoise -, followed by the Princes of Orange, Counts of Nassau, Princes of Isenghien and Arenberg, Marquis of Vogüé, and Counts of Laguiche. The wines of the domain are now exported on the 5 continents and benefit from an international fame, such as its Vin Jaune classified among the 100 best wines of the world.

Château d'Arlay is classified as a Historic Monument, an Outstanding Garden and a Vineyard and Discovery. He is one of the 40 members of the prestigious Académie du Vin de France, and I know that for many urbanites, the profession of winegrower fascinates them. Let us move on to the anxieties and hardship common to all agriculture, to rejoice with them in the fruit of this work: wine.