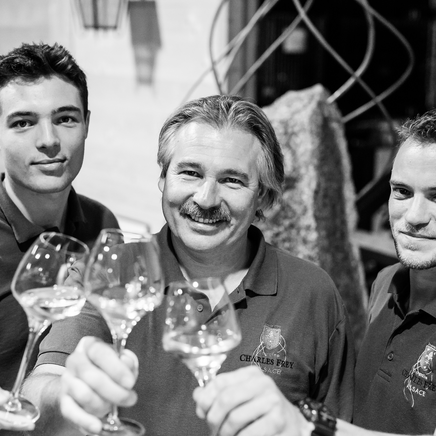 Originally from Switzerland, it was at the beginning of the 18th century that our family settled in Dambach-la-Ville with the ambition of cultivating the vine. Thus, the first bottles saw the day....


Originally from Switzerland, it was at the beginning of the 18th century that our family settled in Dambach-la-Ville with the ambition of cultivating the vine.
Time and bottles have passed and Dominique, Charles' son, converted the entire farm into organic and biodynamic agriculture in 1996. It is
today with the 3rd generation (Julien and Thiébaud, respectively the eldest and the youngest in the family) that we continue to evolve while keeping the same philosophy.

The wines of the estate are now matured in a bioclimatic above-ground cellar. Natural, warm and functional, it further conveys our vision of wine and viticulture.

Most of the terroirs on which we work are made of granite. Our philosophy is

to have a living and balanced soil that respects the

rhythms of nature. This energy deployed upstream offers us pure, lively wines with a minerality accentuated by granite.

In 1997, after several years of research and convinced by naturally good wines, Dominique converted the entire estate into organic and biodynamic viticulture, becoming one of the pioneers in Alsace. Organic viticulture did not have the success we know today and made Charles septic about his practices, probably out of fear of seeing so many years of sacrifice collapse. The beginnings of organic farming were difficult, the eyes of others even led Charles to pick nettle at night, without anyone being able to see him, in order to make herbal teas for treatment the next morning. Charles may not yet have been convinced that organic viticulture would work, but it was important to respect his son's convictions and let time prove him right.