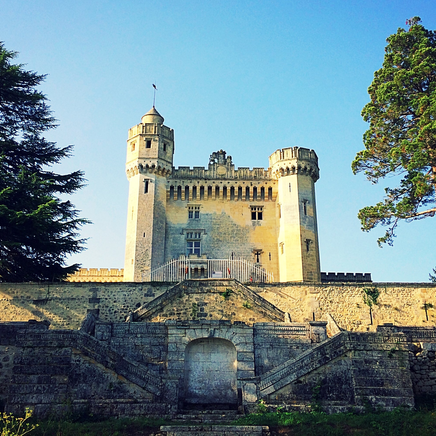 “Discover the magnificent castle known as "The Black Prince's" castle”

Château de Camarsac is located in Bordeaux and Saint-Emilion, in the Entre-deux-Mers region. On the Camarsac valley, the castle dominates the plain and imposes its massive facades. The vineyard is being built....

Château de Camarsac is located in Bordeaux and Saint-Emilion, in the Entre-deux-Mers region. On the Camarsac valley, the castle dominates the plain and imposes its massive facades.

The vineyard extends over 5 communes including Camarsac with a classic grape variety. Eight vintages are produced on very different ranges. The colours are also all represented with red, pink and white.

Often described as the most relaxed of the family, it is Thierry Lurton who is the owner of this winery. This great name of Bordeaux is also from several estates with classified growths in the Bordeaux region. It is with the Château de Camarsac that he established himself in the Entre-deux-Mers region. La Famillle is a real institution in the region with more than 4,000 hectares of vines and 27 properties.

According to legend, it was in the 15th century that the Prince used his influence and money to build this magnificent castle. Shortly after its construction, Duguesclin took over the building. The Château was then bought by the Canteloup brothers in 1407.

The following year, the brothers began renovations. However, the seneschal asked the Canteloups to stop the renovations of the castle and ordered its destruction. Monet, a renowned painter, appealed against the decision to the King of England. Henry IV authorized the continuation of the renovations and they resumed.

The centuries passed and in 1858, the entire castle underwent "great works": architecture and decorations were completely redone. Today, Château de Camarsac is known by all the Girondins from more or less far away.

Born into a winegrower's family from father to son, Thierry was dedicated to being a winegrower. Yet it wasn't his first choice. After working for several years in Brazil as an educator for children, the call of the vine is too strong and he returns to France. He first worked with his sister Sophie at Château Bouscaut, a classified growth in Pessac-Léognan, then decided to fly on his own by buying Château du Prince Noir.