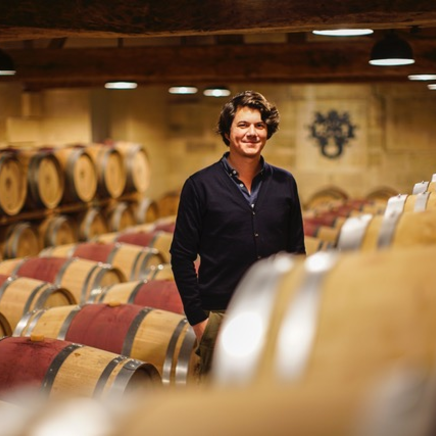 Dominique never asked himself what he wanted to do... He always knew. His vineyard, his terroir, his region, he has them in his skin. We too, especially since Dominique prat....

Château des Annereaux in the Lalande de Pomerol appellation has been a family property since 1390. The 25 hectares located on beautiful gravel-sand soils of the right bank of Bordeaux are cultivated in organic farming since 2010. In 2016, Benjamin Hessel took over the estate alone, with a view to continuity and excellence while preserving the environment, in particular through the practice of agro-ecology.

The Château des Annereaux owes its first hours of glory to a woman. At the end of the 19th century, Caroline Ponsot, the young widow heiress of the property, was recognised by her peers as "the Gironde emblem of a woman's victory over the ravaging scourge". She was the one who carried out in-depth research into the fight against phylloxera in her own vineyard, and who was crowned with success for her work on American rootstocks and her numerous books on the subject. Thanks to her determination, the Château des Annereaux became the example to follow and was praised by the eminent specialists of the time.

I am attached to the roots of the past, but with an eye to the future, in line with the generations that preceded me. I am exploring new interpretations of the terroir, favouring finesse, elegance and drinkability with a reduced ageing process and only 25% new wood, perfectly integrated and controlled. A wine balanced between a complex, slightly spicy nose, crisp fruit and a velvety mouthfeel, with smooth tannins. The promise of a wine that is both ready to drink when young and has tremendous ageing potential.

In 2018, our work was rewarded by the referencing of our vintages by the Cave de l'Élysée.