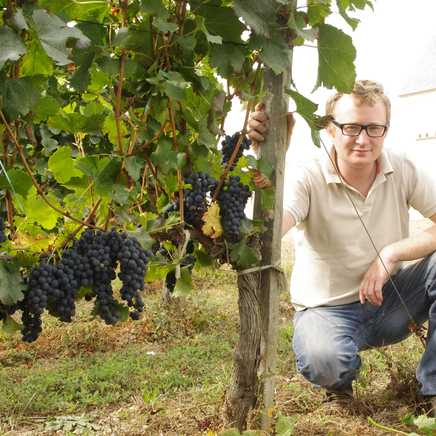 Château Grand Launay, a family property in Côtes de Bourg, has belonged to the COSYNS family since 1968. It was Michel COSYNS, oenologist and trained by Émile PEYNAUD in Bordeaux who bought the vineyard....

Château Grand Launay, a family property in Côtes de Bourg, has belonged to the COSYNS family since 1968. It was Michel COSYNS, an oenologist trained by Émile PEYNAUD in Bordeaux who bought the vineyard and it is now his son, Pierre Henri COSYNS who took over the estate in 2007...

Château Grand Launay, a family property in Côtes de Bourg, has belonged to the COSYNS family since 1968. Michel COSYNS, an oenologist trained by Émile PEYNAUD in Bordeaux, bought the vineyard and it is now his son, Pierre Henri COSYNS, who has taken over the estate since 2007:"After my engineering degree and 3 years in the Paris region, I returned to the family estate: my father was sick, he needed me. I had never considered this return to the roots.... I resumed my studies in oenology and graduated as an oenologist in Bordeaux in 2005. The choice of certification in organic farming was obvious: successive owners of Launay have always worked in this direction.

But it is not an end in itself. Today, biodynamics is a logical continuation of the work begun. We are always looking to go further: wines without added sulphur, indigenous fermentations, vegan vintages... "The estate has been certified in Organic Agriculture since 2012 and switched to Biodynamics in 2018. On the farm, Pierre Henri only uses natural plant care products. The vineyard benefits from a varied landscape and a preserved ecosystem: a diversity of landscapes, fauna and flora, woods, a pond..... The vineyard has 24 hectares in Teuillac on a clayey-silt soil and 6 hectares in Lansac on a clayey-limestone soil. The grape varieties are 70% Merlot, 20% Malbec, 8% Cabernet Franc and 2% Cabernet Sauvignon, which presents wines with deep colours, a nose of spices with an opulent and full-bodied character. The vineyard also cultivates 2 hectares of Sauvignon gris for white wines.

If my father never diverted me from my passion for physics and engineering, he hoped that I would come back to earth on my own. On each of his vintages, the systematic signature "COSYNS et FILS" implicitly showed his desire to see me one day take over the family vineyard.