Last hours to enjoy our selection of discounted Champagnes ! 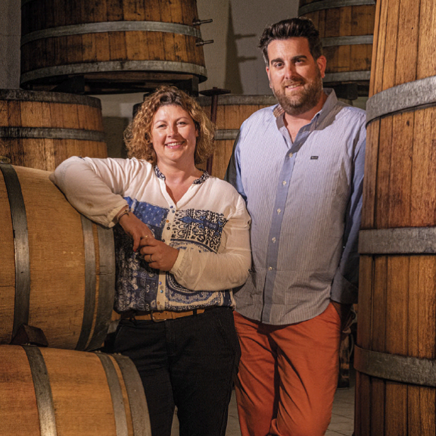 The adventure of this vineyard was launched in 2004 by Nicolas and Alexandra, it is a group of different Châteaux that belonged to the family, including Château Gontet for example. The vineyard of a...

The adventure of this vineyard was launched in 2004 by Nicolas and Alexandra, it is a group of different Châteaux that belonged to the family, including Château Gontet for example. The 56 hectare vineyard is located in the heart of the Gironde. Château de Laussac was acquired in 2004, which allowed them to launch the Robin Vineyards adventure. It is located near Saint-émilion, and has been a place dedicated to wine for over 200 years. We produce wines of rare and voluptuous pleasure of great delicacy and complexity, and Château Gontet, which has been in the family since 1980, allows us to offer a wine from the Puisseguin St-Emilion appellation.

Having been raised in the middle of the vineyards, we both followed studies in the wine world. Once we had acquired the fundamentals, we decided to join the ranks of our families who have been passionate about wine since 1768. We now produce wines that are recognised as among the best. By carrying out a reasoned cultivation and by surrounding itself with consultants recognized for their exceptional work. Respect for our land and the environment is part of our way of life, which is why our vineyards are cultivated in a sustainable way.

Our vineyards reflect the work of our entire team, as each of them brings their expertise to the table. Robin Vineyards: it is a balanced team and a common ambition.