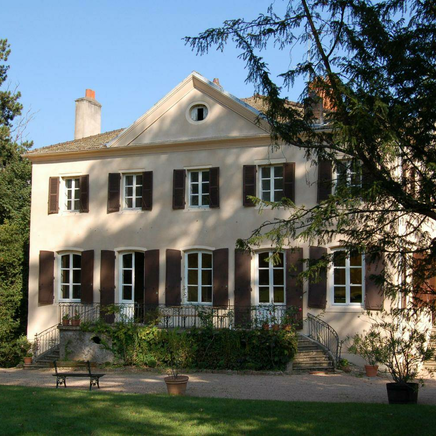 Eric and Nathalie are keen to pass on their passion for wine and art. Every year Nathalie organizes an outdoor painting workshop with a painter, and every summer a concert is held...

Eric and Nathalie have at heart to transmit their passion for Wine and Art. Every year, Nathalie organizes an outdoor painting workshop with a painter, and every summer a concert is given at the Château during the Beaujolais festival on stage and in music.

Château des Gimarets cultivates 3.75 hectares of vines in one piece and which are exclusively in the Moulin à Vent appellation. With an average age of 55 years, these vines benefit from a rare amount of sunshine that contributes to making the estate one of the most famous in the region. Château des Gimarets has a soil whose great homogeneity is particularly favourable to the development of Gamay. They are indeed granitic arenas, resulting from the degradation of a fairly friable pink granite, acidic soils and rich in manganese. The vines are pruned in low goblets for a high planting density: 10,000 vines per hectare, in order to create "competition" between the vines to increase the quality of the grapes. Taken over in 2007 by Eric and Nathalie Boyer, the estate now has modernised facilities. Adjacent to the vines, the vatting room was thus reinstalled in a body of a 17th century building, completely redesigned to meet the requirements of the size of the farm. Similarly, the cultivation of the vine since 2017 is conducted in organic and biodynamic way: Under the impetus of its owners, Château des Gimarets has regained its status as a great wine.