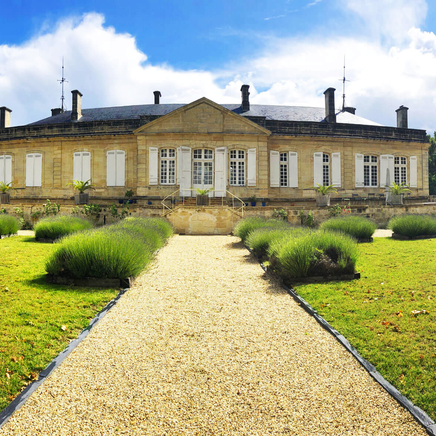 “Discover the magnificent Chartreuse dating back to 1760”

Our estate is located on the banks of the Garonne where we run a 33-hectare vineyard. On clayey soils, Château Sainte Barbe produces its wines on the AOC Bordeaux and AOC Bordeaux...

Our estate is located on the banks of the Garonne where we run a 33-hectare vineyard. On clayey soils, Château Sainte Barbe produces its wines on AOC Bordeaux and AOC Bordeaux Supérieur. The vineyard is composed of old vines and 20 000 new vines. The majority of the vines are Merlot, the rest are planted with Cabernet Sauvignon, Cabernet Franc and Petit Verdot. We offer Bordeaux wine lovers two red vintages aged on wood in different vintages from 2006 to 2015. Controlled yields and controlled maturation make our wines fruity, round with nice melted tannins and aromas of red and black fruits enhanced by a hint of spices.

Château Saint Barbe, with its breathtaking view of the Garonne, is built above the cellars. At the time, the stored barrels were transported, by rolling them, on boats waiting for them on the Garonne to take them to England or Northern Europe.
In the middle of the 20th century, about 20,000 vines were missing. All of them were replaced. In the years following this episode of great rehabilitation, almost half of the vineyard was replanted.

In 2013, the Château is experiencing a new boom with its purchase by the de Gaye family, who are continuing the efforts of the previous winegrowers and are investing more and more in the search for fine quality wines.

As our ultimate goal is to produce quality Bordeaux wines, we continue our efforts by managing our vineyard with sustainable agriculture. During the 2000s, our family acquired several estates and allowed us to be more rigorous in the work in the vineyard and in the cellars.