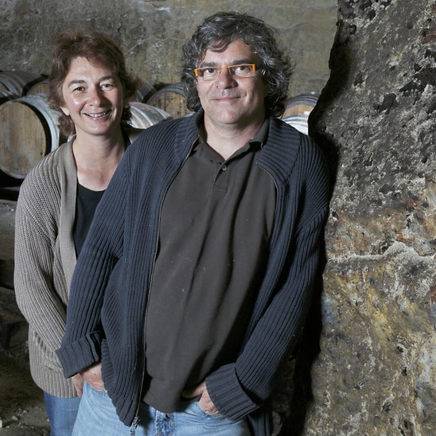 (111 ratings)
“The terroir is expressed when the vines feel good!”

Le Clos des Quarterons is a magnificent and unique place with a cellar dug in the tufa in the hillside of Saint Nicolas. The wines of Saint-Nicolas de Bourgueil are recognized as PDO wines (A...

Le Clos des Quarterons is a magnificent and unique place with a cellar dug in the tufa in the hillside of Saint Nicolas. The wines of Saint-Nicolas de Bourgueil are recognised as PDO (Protected Designation of Origin) and are only produced in the municipality of the same name! The conditions in which the vines are raised are exceptional. Indeed, the region is bounded to the north by a forest that protects the vines from cold winds. But the vines are also exposed to the South on a gentle slope, which allows the vineyard to enjoy a beautiful sunshine all year round.

Le Clos des Quarterons, much more than just a place, is also a family story! This estate has been the birthplace of the Amirault family for over 180 years now. Today it is Xavier and his wife, Agnès, who lead about thirty hectares with sincerity and precision.

Organic agriculture but above all a biodynamic vineyard and parcel vinification allow us to appreciate the very expression of the terroir. The estate has very beautiful gravel. Some plots are expressed on the tuff, directly in the limestone, while others are on deeper soils with a layer of clay.

It was after a stay in the United States that I returned to the family estate to take over from my brother Thierry. In the continuity of his work, I led the field in organic agriculture from the beginning. Then, together with him, we integrated a biodynamic dimension into it. More than a philosophy, the joy that overwhelms us when we see biodiversity revealed on a daily basis is indescribable...

Biodynamics for me is a return to understanding our soil so that our vines feel good in their soils! It also allows us to react according to the observation of the behaviour of our plants. When I was a kid, I used to hide in the cellar, it was always a magical place for me!