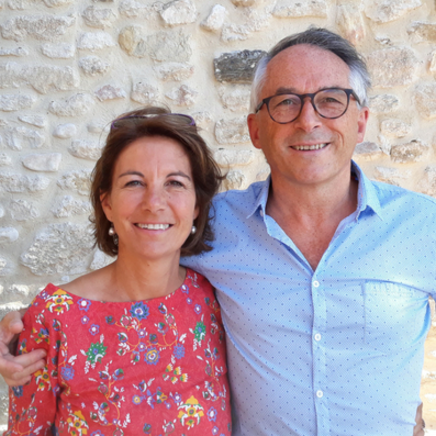 The Mas Caron estate was created in 2015 by Marc BOULON, former sales manager in the sale of computer software for 30 years. For about ten years Marc had the pro in mind....

The Mas Caron estate was created in 2015 by Marc BOULON, former sales manager in the sale of computer software for 30 years. For about ten years Marc had in mind the project of taking over a vineyard. His children being independent and after meeting Cerise, his partner, he decided to embark on this adventure of passion at his side. After a year of research, Marc and Cerise fell under the spell of a Provençal farmhouse built in 1720 completely surrounded by vineyards and olive trees. This building has a superb view over the laces of Montmirail and Mont Ventoux, which strongly influenced the owners' choice, but if the vines were already there, the farmhouse was not yet a domain. Well surrounded and always animated by his passion for wine, Marc created everything: the name of the estate, the vintages, the cellar... It is both an opportunity because it has allowed him to choose a field that resembles him but it is also a big challenge because there is everything to do and in particular to create the notoriety of the field. This is also why the estate very quickly embarked on wine tourism. He therefore resumed his studies to complete a professional Baccalaureate in vines and wines by correspondence with the Orange Wine School, in order to have the necessary knowledge to create his own wine estate. He completed a practical internship at Château Juvenal in Saint Hippolyte-le-Graveyron to acquire the technical side. For the anecdote, the name of the domain comes from a play on words with the term "mascaron", which in architecture refers to an ornament generally representing a mask or a human figure whose original function was to keep evil spirits away so that they would not enter the house. Marc also wanted to wink at his origins, since Parisians often pronounce "macaroons". The farmhouse being located in the commune of Caromb, the name is also a way to integrate into its environment. Finally, Mas Caron's initials are "M C" like Marc and Cerise. The estate now has 11 hectares of vines, 4 of which were planted in March 2018 to offer more diversified vintages in the future

They met in Paris, under the snow. They discovered their common passions over a drink, and soon chose to share their lives. They travelled south in search of a domain and found it in the Ventoux: Le Mas Caron. A new life that began around wine! After 2 years of hard work, we are very proud of the recognition our people have received: - in June 2018, our Pilavoine 2017 rosé entered the hatchet guide. - the Garance 2017 obtained a score of 13.5/20 in the French wine magazine. Finally, it was Andreas Larsson from Sweden, voted the best sommelier in the world in 2007, who had the opportunity to rate the estate's wines: - the red Garance 2016 and the red Caladoc 2017 obtained a score of 86/100 - the Pilavoine 2017 rosé obtained a score of 87/100. Many thanks to our current and future customers, we are trying to keep up the good work!

Caladoc, present on more than 4Ha on the estate, could have been a brake for potential buyers, but with global warming and the runoff of Grenache, it becomes an asset, provided it is not harvested too late, otherwise one obtains tannins too hard and numerous. The estate has made it a single varietal cuvée, named H724, the name given to Caladoc by INRA. This grape variety is also very popular because it is still unknown to many consumers.