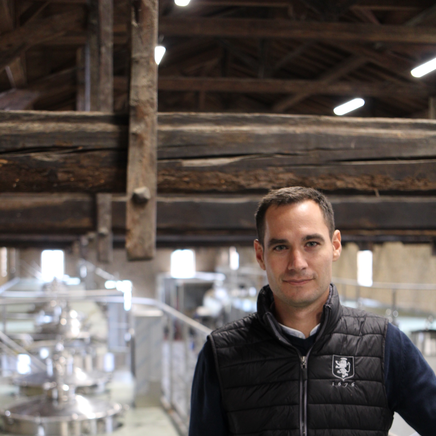 Since its birth in 1676, this beautiful wine château, built to the plans of Jules-Hardouin Mansart and André Le Nôtre - whose main door was carved with a Bacchus, the God of life - has been a...

Since its birth in 1676, this beautiful wine château, built on plans by Jules-Hardouin Mansart and André Le Nôtre, has remained a family home. The descendants of the founder, Jean-François de La Chaize d'Aix, have looked after the estate for nearly three hundred and fifty years. In 2017, they passed it on to another family, that of Christophe Gruy. Determined to magnify this remarkable vineyard with the greatest respect for nature, he developed, with Boris Gruy - his nephew and Director of Operations of the estate - a daring ecological approach: conversion to organic viticulture, then to biodynamic viticulture, valorization of each by-product of the winegrowing activity in a dynamic of "0 waste", use of machines, vehicles and materials that run only on electric energy, objective "0 CO2 emissions" thanks to the electricity and thermal energy of the buildings made of renewable energy, and a plot-by-plot approach allow the wines of Château de La Chaize to fully express the character and singularity of their terroir. Stretching over 350 hectares, including 300 hectares in one piece, its vineyard has a production potential of 150 hectares, in the Brouilly, Côte de Brouilly and Fleurie appellations. Since 2017, Château de La Chaize has been developing a range of cuvées, all of which are produced by plot-based vinification.

In 1996, during the G7 summit held in Lyon, the Château de La Chaize had the honour of receiving the wives of the heads of state present at this international summit. Hillary Clinton's security being key for the American services, the pool in our garden Le Nôtre had the right to an unexpected visit as it was searched by frogmen to check for the absence of possible explosives!