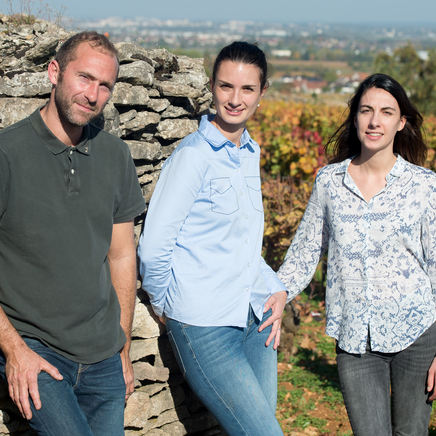 Located on the Côte de Nuits, between the emblematic villages of Fixin and Gevrey Chambertin, it is in Brochon that the Cluny family has been cultivating the vines for 5 generations on 7 hectares. Conciliating technology...

Located on the Côte de Nuits, between the emblematic villages of Fixin and Gevrey Chambertin, it is in Brochon that the Cluny family has been cultivating the vines for 5 generations on 7 hectares. Combining traditional viticulture and winemaking techniques with a modern and responsible vision of wine, the Cluny family cultivates some of the most beautiful climates in Burgundy. A selection of berries and rigorous control during vinification allow the purest expression of these exceptional terroirs.

Domaine Cluny is located in Burgundy, on an exceptional site that is above all a witness to 2000 years of history. The terroir that welcomes it is a true mosaic of multiple wine estates where each climate makes it possible to produce a unique wine. The Burgundian climate is a unique parcel of vines, shaped by human labour since the Middle Ages.

The history of the estate began in the 20th century when Charles Cluny, who initially came to work at Château de Brochon, invested himself in a few parcels of vines. His son, Paul Cluny, then took over. He worked on the estate and gave it a new lease of life by expanding it before passing it on to his son Charles.

Generations follow one another, Michel took over from his father Paul, buying in turn new plots. Then it was passed on to his son, Hervé Cluny in 1990, the 5th generation of the family in charge of the estate and father of Léa and Camille. They are the ones who now cultivate 7 hectares of the most beautiful plots of land on the Côte de Nuits!

At 27 and 30 years old respectively, thanks to the work of Édouard, husband of Léa and winemaker of the estate, they bring a breath of freshness and femininity to the Côte de Nuit with resolutely modern wine styles.

The two sisters represent the first generation of women at the head of Domaine Cluny!